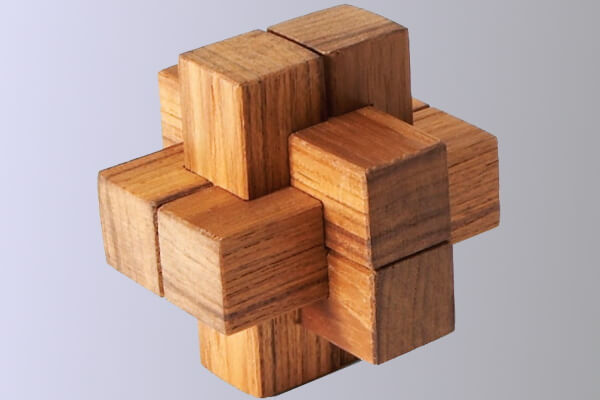 Playing with sliding wood blocks, what could be more fun? Well, if it’s a Burr puzzle you’re in for so

How to Solve Burr Puzzles

This popular game belongs in the interlocking puzzles category and they all use the same basic idea. The set consists of six (or more) notched sticks, or little pieces of wood which the player must use to recreate a certain shape.

The most popular interlocking puzzle is the 6-piece burr, also known as “Puzzle Knot” or “Chinese Cross”. The aim is to slide and lock the 6 sticks into position to form some sort of a cross. Some variants of the game have a so-called key, an unnotched piece which can easily slide in and out.

No matter what shape you need to replicate, the notches on the pieces fall on the inside, where they cannot be seen, leaving the outer surface smooth and quite puzzling as it is impossible to tell how the sticks fit together. In fact, taking apart such puzzles is as challenging as creating the required shape.

There are two main types of such puzzles – Solid Burr puzzles which don’t have any voids or empty spaces inside, and Holey Burrs which have at least one empty space inside, usually not visible from the outside.

Watch How to Solve Video Using a LEGO Burr Puzzle

The Chuck puzzle differs from other Burr puzzles because it consists mostly of U-shaped pieces of various lengths. Some of the sticks have an extra notch ande are used as key pieces.

Another version of the classical Burr puzzle is the Pagoda, also known as “Japanese Crystal”. The smallest version, Pagoda 1, has only three sticks and does not even require notches to be assembled or taken apart. A Pagoda of size 2 has 9 pieces, while bigger variants come in sets with 19, 33, 51 or even more pieces. This might seem a bit complicated but, the truth is once you understand how the pieces fit together it’s easy to assemble the puzzle.

Diagonal Burr puzzles present an interesting variation. The notches on the pieces are not square as in the classical Burr puzzles, but diagonal, which changes the way the pieces slide against each other.