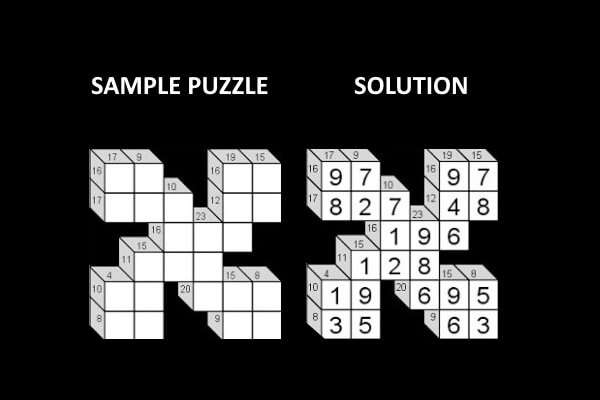 How to Solve Kakuro Puzzles

First, let’s have a look at what Kakuro puzzles look like. The traditional version is a 16×16 grid, filled with white cells divided by black cells. A line of white cells is called an entry.

In a crossword puzzle you have the cues listed on the side, but in Cross Sums your clues are numbers and are printed on the black cells that form the top row and the the leftmost column. If the clue is, say, 7 the numbers in the solution must add up to 7. You can use any number from 1 to 9 to arrive at a sum, which represents the solution to an entry. You are not allowed to use the same digit twice in the same line.

Each line or entry has to contain at least two digits, while the longest possible line has nine cells, so you have to use all the numbers from 1 to 9.

Some version have an added constraint, the rule being that you cannot have the same combination used twice in a grid. For instance, if you have 7 as a clue twice, you cannot use 4+3 in both cases.

Tricks to help you with the Kakuro Puzzle

Guessing is not a good strategy to solve a Cross Sums puzzle, you have to use logic, make deductions as to the digits you should input by considering their position both in the horizontal and the vertical clues.

Start by looking at the shortest entries, preferably those with two cells. Also, see if there are any 3 or 4 clues. If you have 3 as a clue, the only possible answer is 1 plus 2. When the clue is 4, the answer can only be 1+3, as you cannot duplicate the twos in 2+2. Even higher sums can be easy to solve. If you have to use two digits to add up to 17, those two digits can only be 8 and 9, and you have to decide where each of them fits best.

In Japan, these puzzles are almost as popular as Sudoku and the name Kakuro means addition cross. In the Western part of the world, the term Cross Sums was coined in 1966 by Canadian Jacob Funk, but today most publications use the term Kakuro.