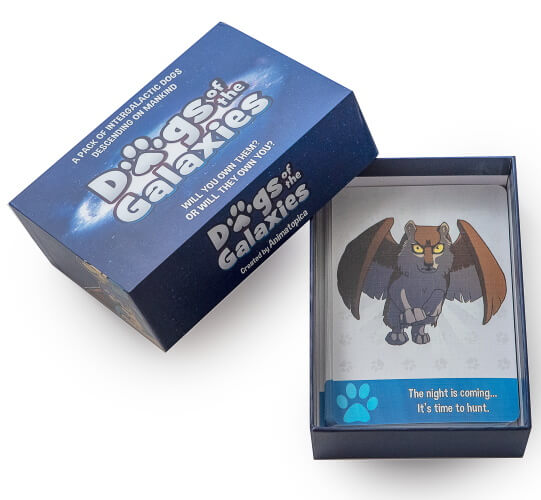 What is Dogs of the Galaxies?

Dogs of the Galaxies is a card game for people not embarrassed making crazy faces, uttering weird words or barking “woof”, “woof” while wagging the tail. Perfect for your next game night. Below are a few reasons why you, your family or friends will love it.

If you’d rather read How to Play Dogs of the Galaxies card game, we’ve got you covered too:

It takes 2 minutes to learn and about 20 minutes for each game.

The player with the weirdest name, or sound, wins the point(s) for each round. The first to get 10 points wins the game.

Card games have come a long way, dating back to classic card games that you can play with your traditional standard 52-card deck comprising clubs, diamonds, hearts and spades. Different types of card games can be played using the standard 52 playing cards, including poker and its variations.

The world of card games today.

Developers of card games have veered off the beaten paths of old and have become even more creative. Instead of the having only the traditional card games that are played using the standard 52-card deck, all manner of ideas are today being expressed in card games to make them more interesting and original.

Whereas great grandma played only card games with clubs and diamonds, today’s players enjoy card games in which they challenge and embarrass each other, or expose each other’s deeply held secrets and character foibles.