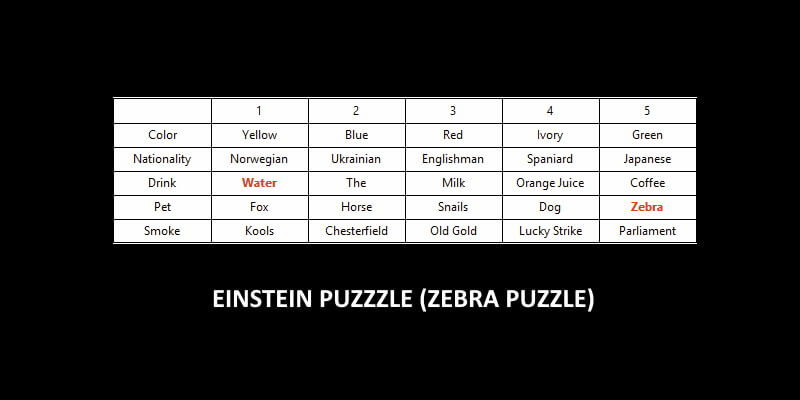 You probably won’t come up with a revised relativity theory, but at least you’ll feel pretty good about yourself once you get to the solution.

If you like riddles you may have heard of this puzzle before, as it is quite famous. Not because it was invented by Albert Einstein, actually he didn’t have anything to do with it. Lewis Carroll is sometimes referred to as the author, but such claims are also baseless.

What is Einstein’s Puzzle

The riddle, for it’s practically a very complex riddle, is made up of 15 statements or clues about five houses and their occupants. Here are the first two clues of this puzzle.

1.There are five houses.

The rest of the clues refer to the position of the houses, the nationality of their owners, the color of each house, the cigarettes and drinks they prefer and the sort of pets they keep. You have to answer to questions – who owns a zebra and who drinks water.

How to Solve Einstein’s Puzzle

What you need are good detective skills. You ca start by simply drawing five houses and listing what attributes you can be certain of under each of them. You need to read carefully all the statements and see which are clear facts and which clues require further deductions and inferences. For instance, clue number 10 says that

There are those who point out the riddle doesn’t say if it’s the first house from the right or the left, but that doesn’t affect the solution.

At least now you have something to work with. For instance you know the first house cannot be red because its owner is Norwegian, not English. And so on. Make sure you write any deductions in pencil and have a good eraser at hand.

Over time there have been many versions of this riddle, but they only differ in attributes like the brands of cigarettes mentioned or the drinks. The principle is the same though.

Watch Video on How to Solve Einstein’s Puzzle