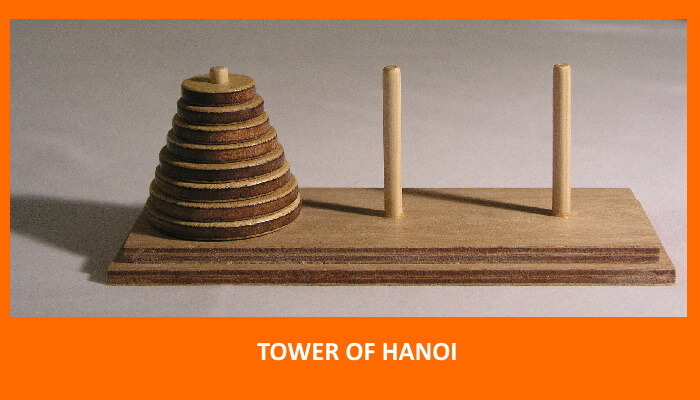 Once you get the trick, solving this puzzle will be a piece of cake!

What is the Tower of Hanoi Puzzle

You might have heard of this game as the Two Towers or the Tower of Brahma.

What you have to start with looks simple enough. A wooden board with three rods sticking out of it. On the first rod you have a number of disks, stacked in a conical shape, with the largest at the base. The aim of the game is to move all the discs to a different rod and place them in the same order.

Here are the rules:

You can only move one disc at a time.

You can place a disc on top of another, but not over a smaller one, or you can move it to an empty rod.

How to Solve the Tower of Hanoi Puzzle

The difficulty of the game depends on the number of discs in the game. The smallest version only has three discs and it has been calculated it can be solved in 7 moves.

If you’re a math head, the formula is that a Tower of Hanoi can be solved in 2n − 1, where n is the number of discs in play.

You can use this system with larger numbers of discs, creating smaller conical shapes on the two empty rods until you free up the largest of all. All you need is to pay attention and to always calculate your next move.

History of the Tower of Hanoi Puzzle

The puzzle was created in 1883 by the French mathematician Edouard Lucas. That’s a fact, but the legend surrounding this puzzle is quite fascinating. According to the story, there’s a temple in India where there’s a room with three rods and 64 gold discs. There, Brahmin priests following an ancient prophecy have been moving the pieces for ages and when they make the last move the world will end. No need to panic though. If you remember the formula to solve any Tower of Hanoi puzzle it has been calculated that, moving one disc per second, it would take the priests 585 billion years to finish, so we’ve got plenty of time left.