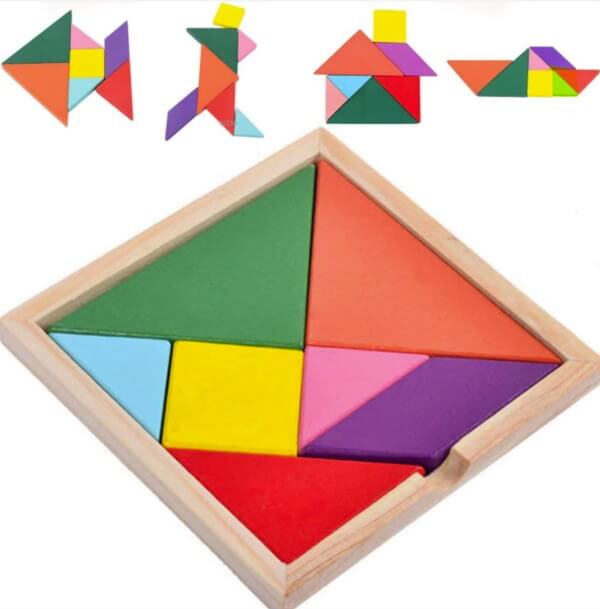 What is a Tangram Puzzle

Tangram falls into the dissection puzzles category and it’s aim it to use seven wood blocks of various shapes to create geometrical shapes.

The seven pieces of the puzzles are called tans and, in a traditional you have five triangles of various sizes, a square and a parallelogram.

A Tangram puzzle box contains a booklet with many shapes the player is challenged to recreate. Obviously, the images only offer the general outline so you have to figure out where each tan fits.

Tangram fans refer to almost similar shapes as paradoxes. There’s for instance the famous Monks Paradox, which presents itself as two very similar shapes resembling a monk, made using the same pieces. However, one is missing a foot, something you might not even notice at first sight. Where did the foot piece go? At a careful examination you will discover that the missing piece was used to give the monk a slightly larger body.

Another example is the Clipped Square Paradox. Naturally, the Tangram pieces can be arranged in a square, that’s how they are sold, neatly placed in a square frame. However, you can also use them to create an almost identical square with a missing corner. The secret is that the second square is a bit larger, but not my much.

If you think that all you have are seven pieces, you’ll be amazed to learn that there are over 6500 Tangram problems registered to this day.

History of the Tangram Puzzle

It is believed that Tangram was invented in China in the late 18th century. It must have been brought into the Western World by sailors on merchant ships. An American shipping magnate is known to have owned a Tangram puzzle in 1802, but the puzzle only became popular after reaching England, after 1810. The Tangram puzzle soon conquered Europe and rich families had expensive sets in which the pieces were made out of glass or tortoise shell. During the First World War much of Europe went into a second Tangram craze, at least the part of Europe that was not on the battlefields.

Tangram Puzzles are still popular these days, although you can now obviously play Tangram online, both the traditional version and various other games using different pieces.