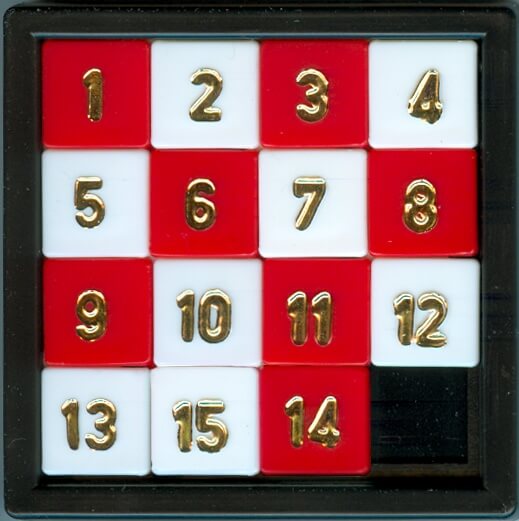 Sliding puzzles are fun toys for kids and grown-ups, but most require a lot of thinking and even some math.

What are Sliding Puzzles

Usually, a sliding puzzle consists of a frame, wood in the past and plastic nowadays, and a number of tiles you must move around to solve the puzzle. Traditional sliding puzzles have 4×4 squares, but the contain only 15 tiles, as you need an empty slot to move the tiles around. This is why many such puzzles are known as 15-Puzzles.

The simplest sliding puzzles are meant for children and the aim is to rearrange the tiles to form a picture, most often a cartoon character.

Puzzles designed for adults have numbers on tiles and they have to be solved according to the rules. The classical 15 Puzzle requires the player to place the numbers 1-15 in ascending or descending order. Other math based sliding puzzles require using a mathematical operation and the numbers on the tiles in each row or column must add up to a certain magic number.

There are also sliding puzzles with letters and the solution is a certain phrase you must write on the board.

Finally, there are sliding puzzles where the tiles bear certain symbols on them. The aim is to make sure the symbols appear only once in a row, column or maybe even diagonal line.

One of the most famous sliding puzzles is the so-called Klotski puzzle, name derived from the Polish term for wooden blocks. As opposed to the numerous plastic sliding puzzles, Klotski is an old-fashioned toy and it was invented in the early 20th century. The wooden sliding blocks are of various sizes and the aim of the game is to move the largest of them to a designated place on the board.

The Japanese have a similar puzzle known as Daughter in the Box, in which you have to help the girl escape from the house where she is kept a prisoner. In such puzzles the main difficulty is that you have to move around the smaller pieces to make enough room to move the larger one.

This type of puzzle is very similar to the countless online sliding puzzles in which the goal is to move a certain block towards the exit.