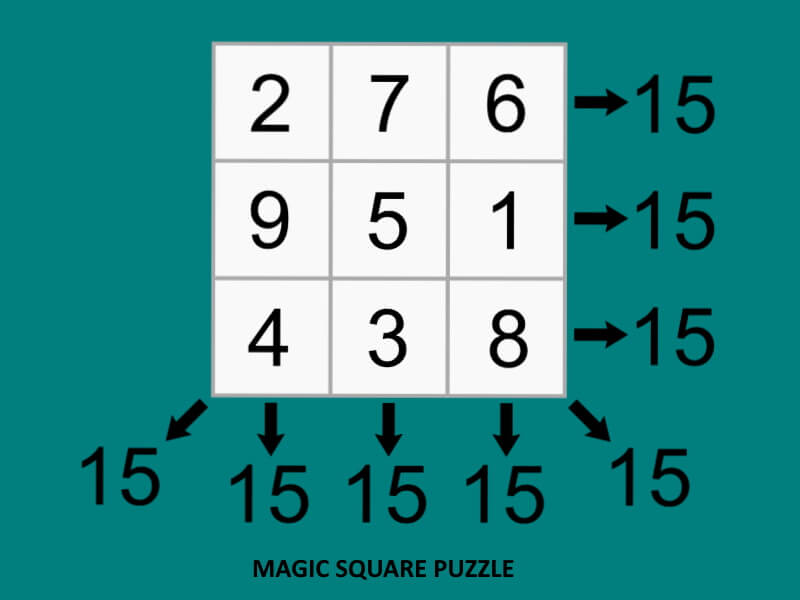 Not everybody likes math, but recreational math that’s different, that’s fun and this is what a magic square puzzle is about.

How to Solve Magic Square Puzzles

Magic square puzzles are simple grids of various sizes which must be filled with numbers, making sure the numbers on each row, column or diagonal line add up to a magic number. The smallest possible magic square is a 3×3 grid using the digits 1-9, with 15 as the target number. In such a small square the numbers appear only once, although in more complex puzzles of this type it is sometimes allowed to use the same number twice.

Watch Video on How to Solve

One of the most common variant is that of the bordered magic square. What you have there is a normal magic square of whatever dimension, bordered by a row of  empty cells. The numbers in the cells above and below each column must add up to a target number as well. The same goes for the numbers added to each horizontal and diagonal line.

History of the Magic Square Puzzle

The first evidence of people, presumably mathematicians, playing with magic square puzzles was found in China and dates from the year 190 BCE. And yes, such puzzles have been associated with magic and studies of the occult. For instance the 190 BCE manuscript called ‘Memoir on Some Traditions of Mathematical Art’, presents a magic square that was allegedly used for divination and astrology.

If filling in one square seems complicated to you, think that Chinese mathematicians had fun creating meta-puzzles containing several smaller magic squares and the whole grid also followed the same principle of all the numbers in a row, column or diagonal adding to the same target number. Now, that’s a major headache!

Magic squares were very popular all over Asia and you can find some depicted on temple walls in India. The magic square puzzle traveled through the Middle East reaching Europe as early as the 12th century. At the time, magic squares of different orders (number of cells) were ascribed to various planets. It was only in the 18th century that magic squares lost their mystic allure and became simple recreational math puzzles.