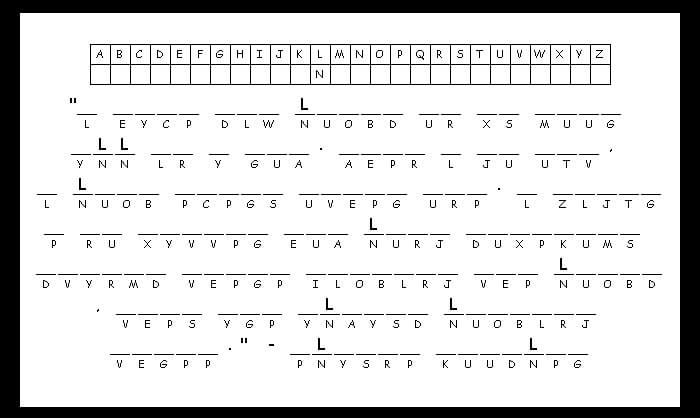 Good for sending secret messages to your loved one as well as to encrypt sensitive military information.

How to Solve Cryptogram Puzzles

A Cryptogram is basically a row made up of lines of empty cells that stand for words. Under each cell there is a certain letter or number. The aim of the puzzle is to understand what letter each of the letters or numbers in the printed cryptogram stands for. These are called substitution cryptograms, meaning that a letter (or number) substitutes for another letter. If you want to use cryptograms to communicate with someone both of you will have the key, but as a puzzle you have to use logic to find the key.

Watch Video on How to Solve Cryptogram Puzzles

Using a cypher to encode a message dates back many centuries, if not more. It is believed cryptograms were invented by monks for entertainment purposes. The oldest known reference to the use of cryptograms can be found in a manuscript dating from the 9th century.  A manuscript discovered at Bamberg, in modern Germany,  mentions the fact that that Irish visitors to the court of Merfyn Frych ap Gwriad (died 844), who reigned over Gwynedd in Wales were presented with a cryptogram which could only be solved by transposing the letters from Latin into Greek.

In modern times, Edgar Allan Poe used cryptograms in some of his works and as a magazine editor he often asked readers to submit their own cyphers, which he would then publish, challenging the public to come up with the solution.

The infamous Zodiac Killer also used cryptograms in messages meant to taunt the police. Only one of the four messages has been solved to this day.

A version of this traditional puzzle very popular today is the CryptoQuiz which is a themed puzzle, and all the words fall in the same category.