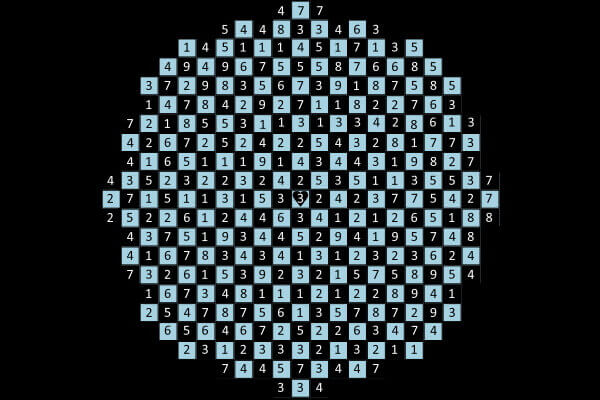 Back from the Klondike is the brainchild of a famous American chess player and puzzle author Sam Loyd, and it was first published back in 1889.

How to Solve Back from the Klondike Puzzle

The puzzle looks like a grid filled with numbers from 1 to 9. You need to start from the square right in the middle, marked with a heart, and find your way out of the maze. The number on that cell says 3. You can move in a straight line in all directions – horizontal, vertical and diagonal. As the number is 3 it indicates you can move three squares. The cell you land on will have another number indicating how many squares you can jump in your next move. Repeat this process, moving in straight line in any direction, until you land on a cell whose number will allow you to make just one step over the borders of the puzzle. This means you got out of the maze and won the game.

Sam Loyd offered a solution to his puzzle and it has to do with favoring the South West route to liberty.

Back from the Klondike Variants

Mathematicians are typically fascinated by this type of puzzles and in 1976 two graduate students from the University of Washington developed a Fortran computer program dedicated to analyzing all the possible solutions to the Back from the Klondike puzzle and they came up with hundreds of ways to get out of the puzzle. The most interesting thing they discovered was that all the escape routes passed through a cell that was part of Loyd’s original solution, but also through one that did appear in his solution. This indicated there was actually an error in the famous puzzle, which has been since corrected.

Modern variants of the puzzle will have the 16th row comprised of the following numbers 81112, while in the original form it was 81212. The good news, at least for math lovers, is that the corrected version has only one solution. For regular people just looking for some fun activity this might not be such a good news! Good luck anyway!