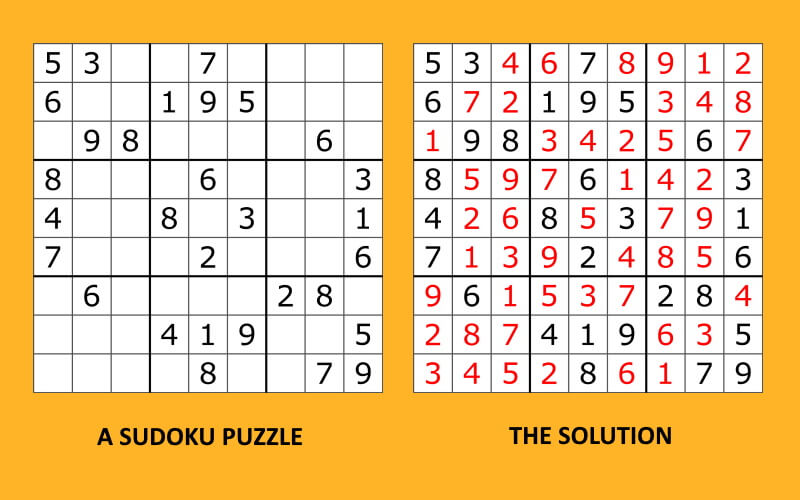 If you have to wait at the doctor’s or have a boring three-hour flight ahead of you, get some Sudoku Puzzles to make time fly.

What is a Sudoku Puzzle

Let’s talk about the traditional Sudoku puzzle first. What you have is a 9×9 grid which you must fill is using numbers from 1 to 9. The first rule is that each number can only appear once in every row or column. Additionally, the grid is divided in nine 3×3 squares in which again the digits must appear only once. Some of the digits have already been filled in for you.

How to Solve a Sudoku Puzzle

The complexity of the problem and the headache depend on the difficulty level. In easy mode you will have more numbers already filled in which makes it easier to guess the solution. Actually, guess is the wrong word here, because you have to use logic to solve the puzzle. The best thing to do is to find the row, column or square with the most numbers in it. For beginner levels this might mean having 7 out of the 9 numbers already locked in place, which leaves you with deciding the positions of the other two. Don’t place them at random, look at the other rows and columns and make sure they don’t clash. Say you have to place a 2 and a 3 in an almost complete row. Look at the first empty square and check the column it’s part of to see if there’s no other 2 on a different row. If there is one already, this means you must place the 3 in the first empty square and the 2 in the other one.

You must always check and double check before placing any number on the grid.

Another method is to analyze each digit, see how many 1s are there on the grid already and maybe you can find the correct spots for the others. If you have multiple possibilities, don’t make hasty decisions and wait till you get more information.

Killer Sudoku is a combination between traditional Sudoku and Kakuro, which means that you not only have to place the numbers in a certain order but also make sure they add up to a target sum.

Hyper Sudoku makes your life more complicated by adding other 3×3 squares which must follow the same rule.

Twin Sudoku consists of the grids that share a 3×3 square.