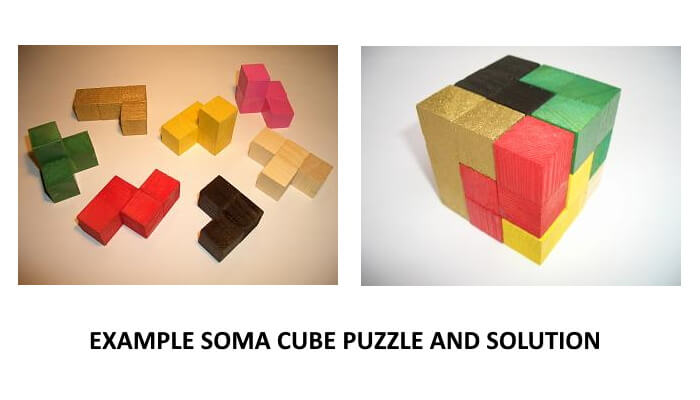 A 3-D puzzle with solid wood blocks some might find similar to modern Tetris pieces.

What is a Som Cube Puzzle

This puzzle falls into the category of solid dissection puzzles. As the player, you don’t have to dissect anything, but rather put the blocks back together to form a solid 3x3x3 cube, with no voids on the inside.

The game has seven blocks, six of them are made of 4 small cubes of equal size, known as cubelets, while the remaining one consists of only three little cubelets. All the blocks are of a different shape and since they resemble letters they are known as V, L, T, Z, A, B and P.

How to Solve a Soma Cube Puzzle

Many mathematicians find such problems as the Soma Puzzle fascinating and devote a lot of time to studying them and, of course, their solutions. Computers do help a lot! According to experts, there are 240 solutions to solve a Soma Puzzle, too many to list here. However, here is an essential clue. It has been discovered that in all the 240 solutions there’s only one place for the T block, that is on the bottom with its long edge along the front and the its “tongue” in the bottom center cube.

History of the Soma Cube Puzzle

The cube was invented by Danish polymath Piet Hein in 1933, for a lecture in quantum mechanics. It’s name is a reference to the drug Soma heavily consumed in the fictitious world invented by Aldous Huxley in his famous ‘Brave New World’ novel, which had been published the year before. And yes, solving such puzzles is an addiction!

However, it was only in the 1960 that the Soma Cube was commercially produced and sold in the United States. Inevitably, some of the versions used plastic blocks instead of the old-fashioned wooden ones. In some sets, players are challenged to form other geometrical shapes after mastering the cube.