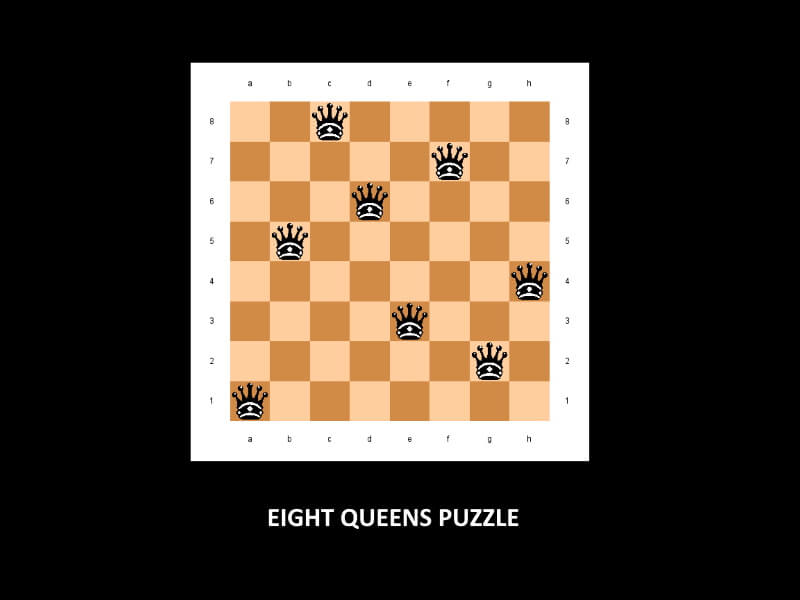 What would happen if you had not two, but eight queens on a chess board?

How to Solve the Eight Queens Puzzle

Solving this puzzle requires not only basic knowledge of chess rules but also mathematics.

The original Eight Queens Puzzle refers to placing the eight chess pieces on a 8×8 board, making sure that no queen threatens another one. As you probably know the queen can move any numbers of unoccupied squares in any direction – horizontally, vertically or diagonally. It is obvious that, in order to solve the puzzle, no two queens can occupy the same row, column or diagonal.

Since such puzzles are meant to be fun, better forget about math and just look at the board. One thing you know from start is that there has to be only one queen to each row or column and you work your way to a solution from here.

History of the Eight Queens Puzzle

This fiendish puzzle was invented in 1848 by Max Bezzel, a German chess enthusiast who created many chess problems. Two years later, Franz Nauck came up with several solutions and also invented the n queens problem. This refers to placing an n number of queens on an nxn board, thus offering the possibility of playing the same game on a larger or smaller board.

If you like this brain-racking puzzle, you should try one of its variants that use other chess pieces, knights, bishops, kings and even rooks. The easiest to solve is the version with knights. Since knights move in an L shape they always land on a square of the opposite color. A simple solution to prevent them from attacking each other is to place all the knights on squares of the same color and it doesn’t even matter where you place them.

Other versions allow for two different types of pieces to be used, like queens and pawns or knights, the goal being the same – keeping the peace on the board.