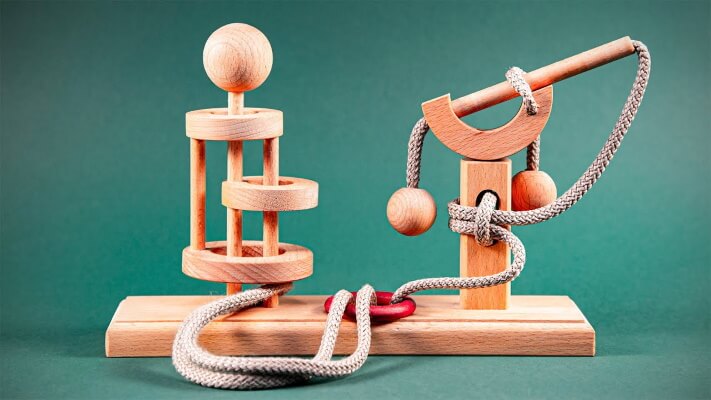 Also known as entanglement puzzles, these are more than simple toys (How to solve video below).

There are many version of this popular toy and all have a common goal, trying to disentangle an element, like a ring, from the loops or plate it seems firmly attached to.

The string can be made of a string or a ribbon and there are various elements attached to it. The toy also has at least one stiff wire, but some also have a ball though which the string is threaded.

You usually have to detach the string from the wire. The loop the string makes can be closed, which makes the puzzle seem impossible to solve, or the loop can be open, but the string has balls or wooden elements to prevent it from slipping.

One famous example in this category is the Boomhower puzzle, notoriously difficult to solve. Subsequent variants use the Boomhower idea and consist of one or two vertical beams on a wood support with various elements attached to them.

All the pieces are usually made of metal and the goal is to detach the ring from the plate. Typically, the plate will have holes or indentations, some meant to help you, some to make your task more challenging.

Sometimes referred to as nail puzzles, these puzzles are made from stiff pieces of wire in various shapes, forming closed or open loops, that you need to disentangle.

As complicated as disentangling such crazily linked pieces, putting it back together can be even harder, but that is also part of the game.

While most disentanglement puzzles take some time and a lot of effort to solve, there are some that are actually unsolvable. Should anyone ever challenge you to solve the “Notorious Figure Eight Puzzle” stay away from it. The puzzle created by Stewart Coffin in 1974 looks deceptively simple, like the figure 8 with a loop string attached to it. Many people have tried in vain to solve it, mathematicians have also looked into it and came up with the conclusion it is unsolvable, which is why it is sometimes referred to as the Possibly Impossibly puzzle.