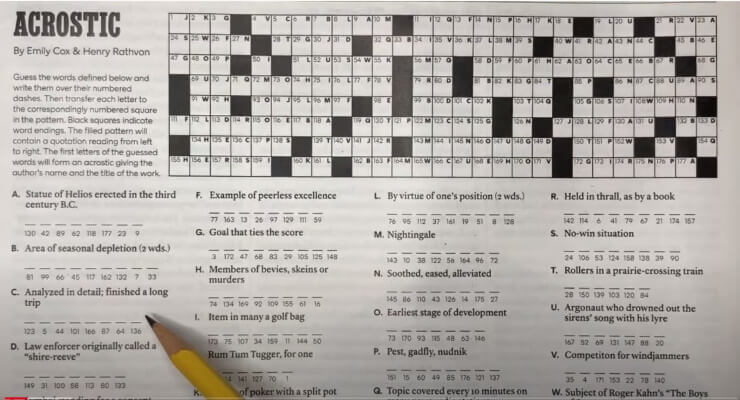 It’s all about the clues. The original version had only two word clues, but in online versions you might start with multiple clues.

How to Solve Acrostic Puzzles

First of all you are given a set of word clues, usually two. The traditional variant that still follows the rules set by the game’s creator Elizabeth Kingsley in 1934 starts with clues for two words you have to guess. The solution to each clue is presented as a series of numbered blanks, indicating how many letters are there in the answer. Each of the letters has a corresponding number.

A player has to use those numbers to start solving the quotation. If you know that 1 stands for A and 4 stands for D, you can easily decipher the sequence of numbers 1-9-4 to be AND, which tells you 9 was N. And so on.

However, online acrostics are more complex than that and look more like a crossword puzzle, a layered puzzle in which you need to guess not only a quote but also the name of the author and the source.

You start by looking at the lettered clues A, B, C etc. Chances are you’ll know a couple of them. Fill in the words in the blank spaces.

Just as in any crossword, each time you fill in a word you will have uncovered some letters that are part of the answers to other clues. Maybe you still don’t know the answer to the next clue but at least you have a hint.

Go back to the set of clues and see if you can guess the next one. If not, move to the next one, there must be something you can figure out.

Guessing the first two or three clues is the hardest part. To solve the rest of the puzzle go back and forth between clues and grid and you will slowly start to decipher the quote that is basically the prize for solving the puzzle.

Originally, the term acrostic comes from a form of poem in which the first letter of each line read from top to bottom spells out a name. For acrostic puzzles, those letters will reveal the name of the author whose quote you have just uncovered.